The many fights of the Kirloskar brothers. Who will win the next round?


It’s clear now. There was nothing permanent about the deed of family settlement that the three Kirloskar brothers agreed upon in 2009. The three seem unhappy, either about what they got, or what they lost out on.

Sanjay Kirloskar got control over Kirloskar Brothers, which by the financial year 2010, had become the flagship of the group founded way back in 1888. Atul Kirloskar, the eldest of the siblings, and Rahul Kirloskar, the youngest, got charge of nearly all other group companies. The two, who have been a team, also have the backing of their mother, and family matriarch, Suman Kirloskar.

Over the next 10 years, the two sides either contested the other’s control over the companies or expanded the fight to the family’s heirloom, including a Pune-based property that their late father Chandrakant Kirloskar had willed to his wife.

“Everyone seemed to have agreed upon the terms of the deed of family settlement (DFS) in 2009. There were no disagreements, at least, not visibly,” says a senior industry executive close to the Pune-based family. “The idea was to let each branch of the family independently follow its own vision,” adds the veteran.

Surely, that was not in the minds of everyone. The agreement got tested within a year, when in 2010, Atul and Rahul – and their associates – sold a 13.5 percent stake in KBL to Kirloskar Industries (KIL). Both are listed companies. While KBL is majority-owned by Sanjay, KIL is controlled by Atul and Rahul.

What led to the stake sale? Was it true, as some say, that Sanjay had little idea what his brothers had in mind? While conspiracy theories are many, the transaction has now – a decade later – opened up a new front in the fight between the siblings.

The stake sale is now being investigated by the Securities and Exchange Board of India (SEBI) on insider trading allegations. Some of the allegations are extraordinary. In a rare instance, KIL mailed a letter to the market regulator, in the form of an announcement, alluding that Sanjay pressurised SEBI into investigating the transaction.

Either side is tight-lipped, except for sharing their oft-repeated stance. While KIL spokesperson refuted the allegations, saying the sales of shares “was completed in line with the applicable laws, appropriate stock exchange disclosures and necessary regulatory pre-clearance,” a KBL representative said counter-allegations of a similar transaction by Sanjay’s wife was not comparable, “as it involves transferring shares belonging to her in an individual account to another private limited company.”

The fight has now reached a critical phase. Moneycontrol learns from sources that the SEBI investigation is drawing to a close and the order could come “anytime within the next two to three weeks.”

An order will be a significant victory, or defeat, for either of the sides. But it will not be the end. “Much water has flown under the bridge. If the two sides were serious about ironing out the differences, then the offer by Dr Vijay Kelkar, the former finance secretary, to mediate wouldn’t have been turned down,” says a close confidant of the family. It was in 2017, that Kelkar – also the former Chairman of Finance Commission – had attempted to bring truce. It didn’t work.

In other words, any order from SEBI will be challenged by the losing side in higher courts.

Not just that. The war has many more battlefronts. Apart from the ancestral property in Pune, the family’s home, that is under dispute, the group trademark and copyright are also being contested. Also, Atul and Rahul have dragged Sanjay to National Company Law Tribunal over ‘mismanagement’ of KBL. Not to be pegged back, Sanjay has filed a case against his two brothers, blaming them of not adhering to the non-compete clause as agreed under the DFS.

Atul and Rahul have the support of their mother Suman, and cousins that include Vikram Kirloskar, Vice Chairman of Toyota Kirloskar Motor. In fact, Sanjay seems to be holding his side all by himself.

The deed has surely not worked

“Deed is a document. But without a commitment to adhere to the clauses, a document is meaningless. Commitment comes out of trust among the parties,” explains Kavil Ramachandran, Clinical Professor and Executive Director of the Thomas Schmidheiny Centre for Family Enterprise at the Indian School of Business.​ “If emotions (read anger) over-power logic, people take extreme steps even if it is bad for the self too,” adds Ramachandran.

In the case of the Kirloskars, it surely seemed to have hurt the Group. And it’s not just anger. The close family confidant quoted above, adds that there has been a rivalry among the brothers. “It is not for the first time that sibling rivalry, leading to anger and jealousy, has tainted a business family’s legacy in India,” he adds.

Through allegations and counter-allegations amid the fifth generation, the house of Kirloskar stands divided.

Living on the legacy

Despite recent setbacks, the group that was founded by Laxmanrao Kirloskar in 1888, will find its place intact in the history of Indian business families. It has many accomplishments, including manufacturing India’s first centrifugal pump, first diesel engine and first electric motor.

It was among the first exporters too, starting in 1958. In fact, the legend says that in Egypt, the name Kirloskar was generic for pumps. In the 1960s, the Group formed a joint venture with the Cummins Group, among the leading manufacturers of engines and pumps in the world.

While KBL continues to be a leading player in the pumps industry even now, with five overseas manufacturing facilities, the group has over the decades lost out on its prominence. Comparisons are inevitable with Tata Sons and Aditya Birla Group, business houses that were also founded in the 19th century, but managed to diversify and catch on to new opportunities as the Indian economy opened up.

The KBL website says the Kirloskar Group currently has a turnover of $2.1 billion, a drop from $3.5 billion in 2017, as a report in Mint points out. While the group has over a dozen companies, the five listed entities had a combined turnover of about Rs 11,000 crore at the end of FY20.

If the 2009 deed intended to give a free hand to family members to diversify into new emerging sectors, the effect may have been opposite. Also, there was a slight change in the pecking order of the Group companies. In 2017, Kirloskar Oil Engines (KOEL), which makes diesel engines and generator sets, pipped KBL to become the largest company of the group.

Interestingly, both KBL and KOEL, on their websites, claim to be the flagship company of the Group. Surely, the competition has manifested in several ways. 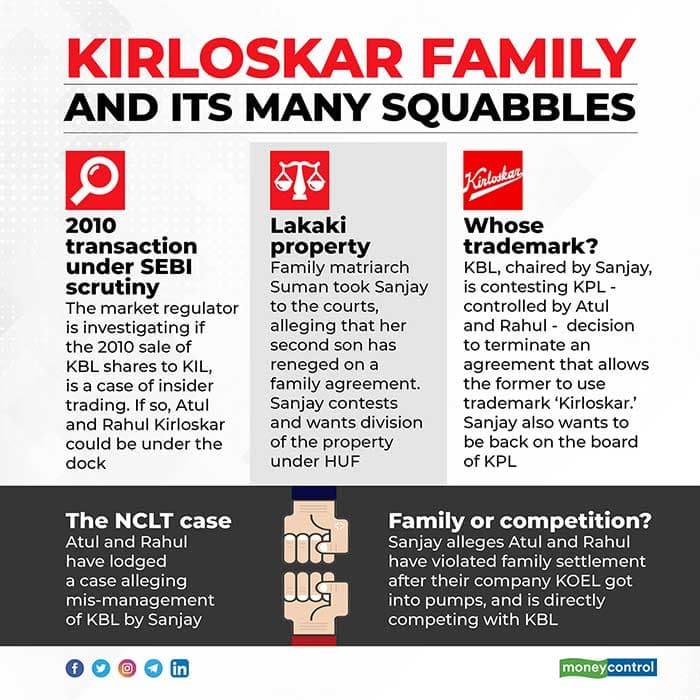 The deed of family settlement, instead of ensuring peace, is now the basis for many a battle within the family.

To start off, did the deed favour one part of the family over the other?  Sanjay, through petitions filed in courts over the last decade, seems to allude that he should have got a higher shareholding in KBL than he originally did. Not just that, in return of getting control over KBL, according to the 2009 DFS, Sanjay has claimed he paid Rs 80.5 crore to cousin Vikram, and also ‘gifted’ shares of Kirloskar Brothers Investment to Atul, Rahul, and another cousin Gautam Kulkarni.

But now, he alleges, the other part of the family has failed to honour the non-compete clause, which seems to have been among the more important parts of the deed.

Sanjay, in his legal suits, says that KOEL went against the agreement by venturing into pumps, something that KBL specialises in. Further in June 2017, says a 2018 legal suit, he was “shocked” to learn that KOEL had acquired La-Gajjar Machineries, which competes with KBL. Sanjay has sought Rs 750 crore in damages.

In 2017, matriarch Suman filed a case against Sanjay, alleging that her second son had demarcated a significant plot on the family’s 65,810-square feet property by the Lakaki lake in Pune, and was trying to build a wall around it.

The Lakaki compound was willed to Suman by her husband Chandrakant Kirloskar and her petition claimed that Sanjay and Atul agreed to hand over their plots for her use and thereon again return it to her after the Urban Land Ceiling Act was repealed. Suman alleged that even as Atul returned the plot to her, Sanjay reneged on this promise.

Not just that. She added that Sanjay had demanded a partition of Chandrakant Kirloskar HUF, which includes real estate, bank balances, jewellery, shares, transistors, tapes and even utensils.

Sanjay, on the other hand, has contested each claim, and in fact, said no such arrangement was ever made. He said in his reply to the court, his mother was trying to gain sympathy.

In December 2019, a Pune court gave Sanjay some reason to cheer when it restrained his mother and brothers from taking any decision on the properties held under the HUF.

Interestingly, points out a senior executive close to the family, it was found out that a document – to make some changes in the property – submitted to the Pune administration didn’t have the signatures of all the brothers, as claimed. “The documents were submitted to make changes in the structure of the Lakaki property. The signature boxes were filled up in such a way that it seemed everyone had signed on it,” said the executive.

Surely, the last word is yet to be said.

Atul and Rahul scored a small victory in April 2019, when the National Company Law Tribunal dismissed a petition by their brother-controlled KBL, which had challenged the jurisdiction to hear a case filed by KIL.

The company, which is helmed by Atul, had filed a petition in 2017, to oust Sanjay as chairman and managing director of KBL. The two, Atul and Rahul, had alleged that the Board of KBL was not allowing them to either sell or buy shares of the company.

Not to be outdone Sanjay dragged his brothers to the court, asking to be reinstated on the board of Kirloskar Proprietary (KPL). Citing the family deed, he argued that he can’t be voted out of the board of the company, which is a central repository of various trademarks and logos on behalf of the group companies.

… and the one steeped in a family legacy

Not surprisingly, KPL – which has Atul, Rahul and Vikram on its board – has terminated the agreement with KBL. This is also now being played out in the courts.

Interestingly, the trademark is said to have been created by Shankarrao Kirloskar, in the early part of the 20th century, while he was with KBL. The buzz around the family is now that both the factions are going back to the history books to claim rights to the trademark.

As of now, there is an uneasy calm in the family. Not that any of the three siblings have called for a truce or waved the white flag, but for the break forced upon by COVID-19, which has slowed down hearings in the judiciary. Nearly all the cases are sub-judice.

The silence may soon give way to the next round of the sibling rivalry. Senior officials at SEBI are hard at work. And that’s why all the eyes and now trained on the market regulator in what would be another of the many milestones in the battle of the Kirloskar brothers. Who will win the next round?