UK Businesses Are Being Hit with Post-Brexit Delays, Bureaucracy – And Higher Costs


Truckloads of British pig meat waiting to be shipped to Germany and stuffed into bratwursts perished at UK ports this month while stuck in line for customs clearance.

It’s a story that barely made a ripple in the UK, as the country’s first month outside the EU was overshadowed by the coronavirus and the grim milestone of 100,000 deaths.

With freight traffic well below usual levels, thanks in part to stockpiling, the overall Brexit effects were also less visibly dramatic than expected. The government avoided the embarrassment of several thousand trucks queuing in Kent and was able to claim victory for its planning.

Businesses tell a different story, one of bureaucracy and delays that add up to higher costs. Elsewhere, hidden under the impact of virus lockdowns, Brexit seeped into all parts of the economy, affecting everyone from online shoppers to fishermen, car dealers, bankers and farmers.

Some of the issues may be short-lived as firms get to grips with the situation. But as the UK tries to untangle an economic and trading relationship forged over almost half a century, some frictions will linger, creating a drag on economic growth.

“People refer to lots of the problems as teething problems,” said Sam Lowe, senior fellow at the Centre for European Reform in London. “But while businesses will learn how to fill in forms, we should acknowledge that new bureaucracy is the new reality and there’s a lot more to come.”

The range of headaches in Brexit’s initial weeks were at times farcical, such as Dutch customs officers seizing a trucker’s ham sandwich because of the new rules on meat and dairy imports. Popular candy Percy Pig hit the news as retailer Marks & Spencer Group Plc dealt with new rules about exports to Ireland.

But the altered landscape also poses a question of survival, particularly for businesses that relied on hassle-free, low-cost movement of products on and off the continent.

“When the EU started taking ham sandwiches off lorry drivers, because they say they don’t know whether the meat meets EU standards, it was petty and ridiculous,” said Essex pig farmer Fergus Howie, who runs export business Wicks Manor. “For them to be so bureaucratic at the border is really disappointing, especially when their trade to us is flowing as normal.”

January may not even have told an accurate trade picture. Many companies stockpiled to avoid any border chaos in the early days of 2021, but those inventories won’t last long.

Government officials acknowledge that logjams could mount as cross-channel flows return to normal levels from around 75% currently, though they don’t expect them to reach the worst-case scenarios modeled last year. They also say some difficulties are linked to the need for truckers to have a negative COVID test, rather than Brexit.

But businesses say what was once simple is now cumbersome. Documentation — especially for loads with different types of goods from multiple suppliers, known as groupage — is among the issues causing delays.

Some hauliers returned to the continent empty to skip queues, which lifted freight rates for six straight weeks, while others avoided Britain altogether. France-UK transport volumes sank as firms bypassed Britain by taking direct routes to Europe, such as the one launched Monday between Dublin and Amsterdam. And that’s all likely to worsen when Britain introduces its own customs checks in June.

Cabinet Minister Michael Gove said this week that goods are flowing “effectively.” Where there are issues, the government “will pull out all the stops to help them adjust.”

Away from ports, there was also a shock for consumers. British shoppers buying online from the EU are getting hit with import duties. That may fuel worries about inflation: households’ outlook for price increases is already elevated. 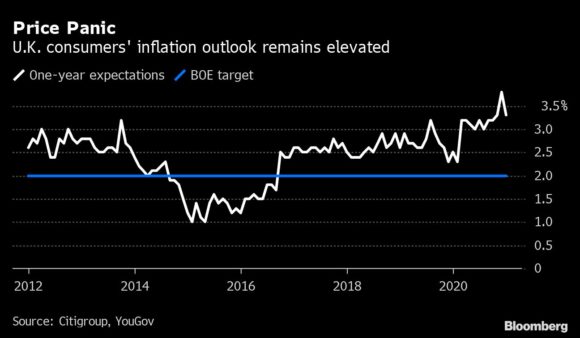 For Britain, the drive to leave the EU was to escape what it said was its bureaucracy and crushing rules, and Prime Minister Boris Johnson got a chance to show the benefits just this week. With the EU’s COVID-19 vaccine campaign falling far behind the UK’s, Johnson pointed to a “speed and agility” that would not have been possible in the bloc.

“We’ve been able to do things differently and better in some ways,” he told lawmakers.

The UK almost left without any trade deal at all, only reaching agreement on Christmas Eve. Even then, some industries remain in the dark about their future.

Finance wasn’t included in the talks, and is now counting on a separate agreement that could be years in the making. In the meantime, the City of London is seeing parts of its business — such as stock and derivatives trading — slipping away. 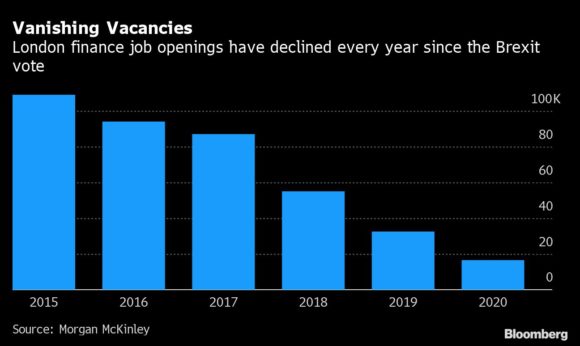 In the first month, issues have proved especially acute for Northern Ireland, which was a major stumbling block in Brexit talks. Images of empty shelves at supermarkets emerged in early January, and J Sainsbury Plc was forced to stock rivals’ products.

The Northern Ireland border controversy unexpectedly resurfaced late on Friday when the EU said it would trigger a Brexit clause as part of new vaccine export controls, before subsequently backtracking.

Even fishing, which became a symbol of Britain’s battle to “take back control” and a sticking point in negotiations, has been an early victim, despite pro-Brexit lawmaker Jacob Rees-Mogg’s insistence that the fish now in British waters are “happier.”

The trade deal regained rights to far less of Britain’s waters than had been hoped for. Some fishermen will end up with smaller quotas for the fish popular at home, such as the chip-shop staples cod and haddock. Exporters are particularly badly hit because their consignments tend to group various products requiring the most different, new paperwork — customs, health and catch certificates.

Ultimately, the UK has taken a gamble, upending trade with its biggest and nearest commercial partner in the hope it will be able to force new and better trade deals with other countries. For businesses shuttling goods between the EU and UK, the consequences are only starting to play out.

–With assistance from Dara Doyle and Alex Morales.